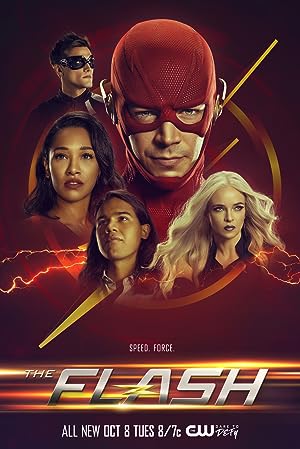 Barry Allen is a Central City police forensic scientist with a reasonably happy life, despite the childhood trauma of a mysterious red and yellow lightning killing his mother and framing his father. All that changes when a massive particle accelerator accident leads to Barry being struck by lightning in his lab. Coming out of coma nine months later, Barry and his new friends at S.T.A.R labs find that he now has the ability to move at superhuman speed. Furthermore, Barry learns that he is but one of many affected by that event, most of whom are using their powers for evil. Determined to make a difference, Barry dedicates his life to fighting such threats, as The Flash. While he gains allies he never expected, there are also secret forces determined to aid and manipulate him for their own agenda.

Having restored some peace to his life after solving the murder of his mother, getting his father out of prison in the process, Barry is left with a fresh start. However, there’s a new threat facing Central City, and its name is Zoom, a more powerful speedster who uses breaches in time and space to make life miserable for the S.T.A.R. Labs crew, Barry’s dearest friends and support.

The Flash is reunited with his supervillain of the week challenges, but there’s a new realm to explore in Earth-2, a mirror planet that Zoom mines for henchmen, which also returns Dr. Harrison to Barry’s life. The “multi-verse” is a major idea for “Season 2,” acting a source of extreme complication to the peace of Central City and the health of our heroes, who not only have to fight physical threats, but cerebral ones as well, tasked with mastering physics and science-y make-em-ups to massage the galactic revelation over 23 episodes.

It’s disappointing to see Tom Cavanagh return to the show after his insignificant presence threatened to ruin “Season 1,” and it’s lame that he’s back as Dr. Harrison, once again showing zero intimidation as the franchise’s monkey wrench. Sure, this Dr. Harrison isn’t supposed to the same as the old Dr. Harrison, but, really, he is, watching “Season 2” scramble to create the same S.T.A.R. Labs energy as before, only without a true dramatic reason to return to the fight.

Select episodes work, mostly due to the idiosyncrasy of the enemy. It’s a joy to watch Mark Hamill return as the Trickster, chewing on the best lines and mugging up a storm in a way only this actor can get away with. He’s so much fun, it’s a shame “Season 2” doesn’t offer the mischievous loon more to do.

The Trickster is far more compelling and energetic an enemy than Zoom. Giant gorilla Grodd also makes another appearance, only this time the production bravely shows him off with CGI wizardry, promoting him to a daytime threat.

The rest of the villains are passable meta-human freaks, and a few outright bomb, but “Season 2” is an adequate mix of the familiar and new, keeping the Flash busy as he attempts to balance the protection of Central City with his personal life, which involves a romance with the new detective in town.

However, it’s a crossover arc with “Arrow” that represents the season’s low point, delivering a convoluted tale about reincarnation and immortality while introducing Hawkman and Hawkgirl to the fold. As charming as the “Arrow” folk are, the production can’t escape its budgetary limitations with this tedious two-parter.